We supply many businesses across the South, from Sussex and Surrey, through Hampshire and Dorset to Wiltshire and Somerset. For more information about the services we offer visit our home page, or contact us here. In this blog you'll find news, interesting snippets, stories and pictures of our staff's adventures out on the road.

It's long been the tradition that trailing plants such as Epipremnum (Devil's Ivy) as shown here, or the old favourite Swiss Cheese Plant (Monstera) are grown up a moss-covered plastic pole for support, known in the trade as a 'mosspole' for short.

However it is increasingly possible to buy the same species grown up either bamboo canes or a wire cage. See image below of Philodendron Brasil (left) and a rather fantastic Scindapsus Trebie (right)that arrived from Holland this morning.

Many people believe that the mosspole is better for the plant; I suppose in theory if you misted it on a daily basis the plant may gain some moisture from it, but in an office setting the moss is bone-dry and it's simply there for support.

In fact empirically I have found that plants that are available either on a mosspole or on canes/a frame perform far better when they are not grown up a mosspole.

In particular they seem to last longer and perform better in low light.

Why is that? Short answer: I don't know.

I suspect that the plant puts more of its energy in to growing strong roots and less in to attaching itself to a pole. But that is a pure guess. If anyone has a better theory, educate me!

Well, here's an odd one.

anyone that isn't a close friend or current/former employee is reading it, with one topic exception.

Back in 2012 I wrote a un-serious post about a serious contender for the world's largest Boston Fern, which was under our care in a Hampshire call centre.

A couple of years ago I was contacted by an American gentleman who was sure his was bigger, and allowed me to post a picture.

Last week I was contacted by an American car dealer who are quite justifiably proud of their Boston Fern: so proud in fact that they are seriously attempting to establish if it is the world's largest, and stumbled upon my blog while doing so.

It really is a monster; in the words of the owner of the dealer: "The fern measures over 7 feet tall and commands an area that is 8 feet by 8 feet!"

They are attempting to find out if such a Guinness World Record exists. I think they must be in with a chance. I will update if I hear so.

Obviously if anyone thinks their Boston fern is bigger than this magnificent specimen, I want to be told! 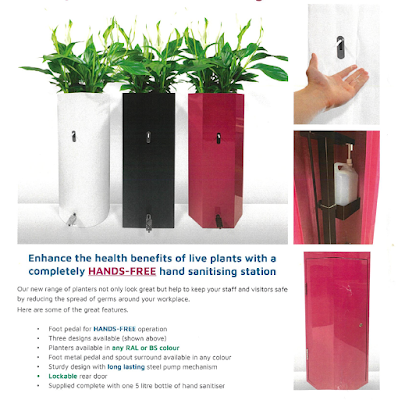 Here's a neat and topical idea by one of our planter suppliers: tall slim plant pots with an inbuilt hand-sanitising station!

I'll freely admit that my post is based entirely on the image above, so I now know what you do.

But it seems like a winner, and Stewarts are very happy to supply them to you.

Sure, it'll be cheaper to buy a bottle of hand-gel from the chemist, but if you want a big, statement sanitising station just inside your office or restaurant entrance for example, in your company's corporate colour perhaps, that people arriving simply can't miss, this has to be a winner.

We could also offer them on a fixed-term lease basis to mitigate the up-front cost.

If of interest, contact us and find out more!

A January update on that Christmas tree


You'll see in the post below that I told the story of a poor lonely Christmas tree in a closed office in Bristol just before Christmas.

Well, good news! When I visited my client yesterday the office in question was open and had a few people there to keep the tree company!

The only fly in the ointment is my nagging feeling that January 19 is a little bit late to keep the tree up; maybe they were just getting their money's worth having not seen it in December? Isn't it bad luck though?

That said - and I couldn't photo this - 'my' client occupies three storeys and is only occupied by the receptionist and the office manager on the 2nd floor. The latter has festooned her entire desk and surrounding desks with tinsel to cheer herself up, and as she quite reasonably pointed out, there's no one else in the office to be bothered.

In an empty office no one can hear you sing carols. Merry Month Late Christmas Everyone!

PS we've had quite a few customers unclear as to whether we are still continuing our maintenance service during lockdown. As this post shows, yes we are, as long as you still want us!

At Christmas, spare a thought for the lonely...

At this festive time when, despite all the Covid restrictions, we like to spend our time with family and friends, we should spare a thought for the lonely amongst us. In this case the lonely Christmas trees.
Back story to this image: I have a large client in Bristol that I look after myself (the Norwegian Mountain Cat / Cake is Real client), and from their window I have a view of an office building opposite, several floors of which also have plants. I have noticed that one floor has been in darkness all the way since March and the plants have been pushed over to by the windows, and are looking rather sorry for themselves.
To my bafflement, early this week a fully decorated Christmas tree could be seen in the window. I do wonder what the point is. I'm also on the verge of going all Zen and wondering that if an office has a Christmas tree that no one sees, does it in fact exist at all?
On that philosophical note, merry Christmas to one and all; here's hoping 2021 is an improvement on 2020!
Jonathan
Posted by Jonathan at 8:36 am

Christmas trees - here's what you didn't have!

Just to reinforce what I said in my previous post here is a great illustration of one of the perils of live Christmas tree ordering.

This is an 8-9ft tree (they are ordered in bands by height) which we had ringfenced for a very exacting client who wants a tall tree but doesn't have a huge amount of space. It looked like a nice slim tree in the net so we put it aside for them.

It should be a nice even conical shape from tip to base, instead it looks like two trees stapled together.

The funny thing is if you put a hand over the screen and cover up the top 40% of the photo, the rest is a reasonably nice 5ft tree, albeit with a rather thick top stem.

Luckily we slightly over-order Christmas trees so that we can mitigate for eventualities like this.

Fear not: it hasn't been cut down in vain. Someone wanted a whole lot of foliage to make garlands out of, so it was of use. Just not all in one bit.

Christmas trees - here's what you could have had

As is usually the case it's slightly perverse of me to start marketing our Christmas tree service as we have no finished deliveries, but as is often the case I am filing photos of same and taking the opportunity to show off our product.

This is one example of the ~ 40 trees we delivered this year, a particularly fine 9ft artificial tree in teal and silver.

Most of the trees we deliver are artificial, save some we have done for long-standing clients; quite simply in a commercial setting we think they are far superior to the real thing.

For a start most offices are simply too hot to install a cut tree and then expect it to look good right up until Christmas. Also, even with the best of intentions, some live trees simply aren't as good as others in terms of shape, thickness etc.

Secondly the artificial trees are so good these days that habit really is the only reason to continue to have live.

Finally, they are much less messy! Put it this way we take a broom and a long-suffering vacuum cleaner in whenever we deliver a live tree, neither with an artificial one.

So if you want one next year get in touch nice and early (we start organising deliveries in late summer!); we have some decorated trees in stock so you'd be welcome to see one in the flesh (in the needle?) at our Broomhill HQ. 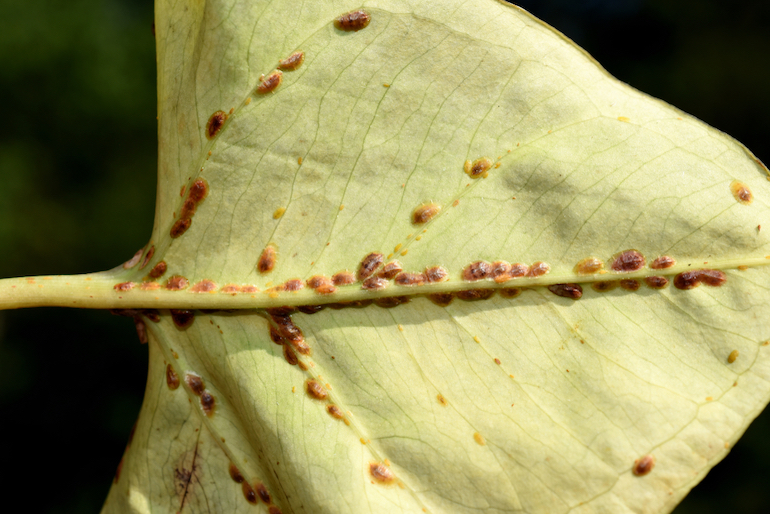 In order to save this blog from being just "Jonathan posts funny signs from offices" here is one of my irregular posts about a common houseplant pest. This one is a little swine, thankfully not the most common, but very tenacious when you do have it.

Hard scale is a part of the larger scale family that also includes my favourite Snow Scale and also Mealy Bug, which many people don't realise is a type of scale at all.

Now, the reason hard scale is a particularly tenacious pest is because it is hard! As you can see in this image they somewhat resemble barnacles.

This means that scale is well-armoured (so nonabsorbent) against any pesticide applications etc. In practice the younger softer scales may be killed, but not the harder ones, so the key if using pesticides is repeated applications.

I am told that rubbing alcohol is also quite effective. But I have found the best method is physical removal, to whit scraping them off with a finger.

We provide an Interior Landscaping service to many Businesses, Corporations and Amenities in Dorset, Hampshire, Wiltshire, Somerset and surrounding counties.

We have an fantastic range of plants and containers to suit all your needs. We are friendly, professional and knowledgeable and are happy to visit and offer advice. ideas and competitive quotes.

Or email directly on intsales@stewarts.co.uk.